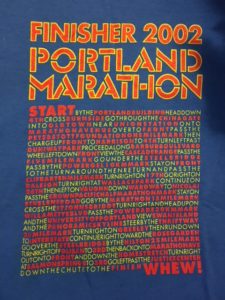 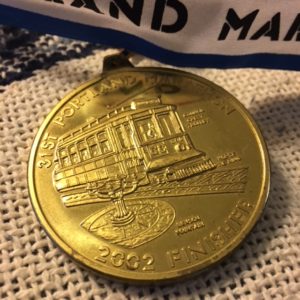 I loved that marathon, which gave the three of us a ton of things to laugh about later. At one point, Dad turned to Susan and asked how she was doing. Susan smiled and said, “I think I should have packed Advil, because I am in some MAJOR pain.” Later in the course we were greeted by a tiny grandmotherly women who caught up with us. She asked if it was our first marathon, and we chatted for a few minutes before she told us to enjoy ourselves, and “I've got to go now. Goodbye!” Still walking, she sped ahead of us and we saw the sign on her back: this is my 50th marathon, how 'bout you? Yes, we got looped by the friendly neighborhood powerwalking grandmother. After Susan drove us back to my apartment, Dad and I learned why you shouldn't immediately sit down after a marathon–getting up was so hard!–and slowly climbed the stairs to my second story apartment. Then I dropped my keys. We both started to bend down to pick them up, and we both stopped. (If you've completed a marathon, you know why!)

The Portland Marathon was the first race expo I ever went to, in the basement ballrooms of the downtown Hilton. Now that I've been to hundreds of race expos, I realize it wasn't even that large in terms of race expos, but it was very exciting. I remember seeing all of the vendors and their running stuff, the weigh-in for the Clydesdale and Athena divisions, and the barbell station for the “pump and run” competition. As a walker, this was all foreign to me. There were attachments to your bib to indicate you wanted to have your picture taken, and another to confirm we had paid the local AVA club so they could stamp our walking books. 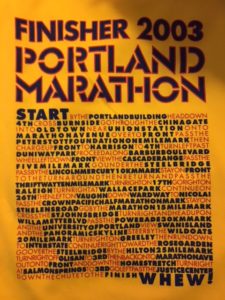 The finish line was my first big race finish line, complete with big finish line goodies. After receiving the medal–a shiny wonder on a red, white, and blue ribbon that I cherish–we received FINISHER shirts. (My first race shirts. My first shirts from Leslie Jordan, the first big athletic apparel company founded by a woman–also a local company.) All runners received a rose, a tree seedling, and other gifts, in addition to the gigantic buffet of post-race food: bananas, snacks, water, gatorade, slices of bread…I was hungry but couldn't contemplate eating the dizzying buffet that lined the post-chute area.

I loved the iconic course, which showed off the entire city. (Until the city ruined the course last year, more on that later.) Runners went through downtown, the gates to Chinatown, under the Steel Bridge, over the St. John's Bridge, and covered parts of each quarter of the city. The course went through a variety of neighborhoods, where residents threw marathon parties with signs, and kids got out sidewalk chalk and pom-poms and acted like cheerleaders. It have views of the Cascades, Swan Island, and the city's skyline. The course literally was the finisher shirt design for many years, which I also loved (though some people were annoyed that the design was the same from year to year).

I loved how much of the city got involved in the marathon. There was entertainment at literally every mile (and you thought the Rock ‘n' Roll series invented that idea? Nope!). I remember belly dancers, classical musicians, a Christian rock band. The course was staffed by volunteers from all sorts of groups; I first got involved in the marathon as a volunteer with the Penn State Club, as the Big Ten Clubs of Portland manned a water stop and several course monitor/directions posts.

For years after I started running, any time someone asked for a race recommendation, the Portland Marathon was at the top of my list. When I moved back to Portland in 2017, I was excited about the possibility of running the 50th annual Portland Marathon. I wasn't the only one in love with this event, which The Bleacher Report called an “exceptional all-around event.” 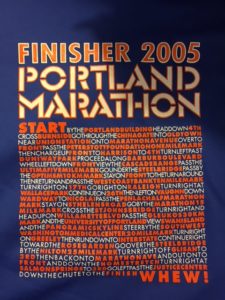 First, former Portland Marathon director, Les Smith, had embezzled a boatload of funds from the non-profit marathon. (Source for this fact and others in this paragraph. I should point out he ended up working out a deal and so wasn't convicted of any crime and did not admit any guilt–but you don't agree to pay back $845,000 that you didn't take in the first place. Fortunately he's banned from serving on non-profits, planning races, and practicing law as part of the agreement.) Like hundreds of thousands of dollars. So much that the Oregon Department of Justice was involved. In addition, there was a questionable relationship between the non-profit Portland Marathon and a for-profit company called Next Events that Smith partially owned. That investigation isn't quite over. It's pretty understandable that once this news broke, runners were uneasy about signing up to run the Portland Marath0n.

Second, that iconic course? It died an ugly death. The final year for the fast, flat (other than the lead-ups to the bridges) course was 2016. The first thing every announcement cites is “declining registration.” I am positive the destruction of the beautiful course directly resulted in a decline in registrations. The 2016 race also hit a snafu when the safety plan didn't get approved by the Portland Fire Bureau, which seems kind of unthinkable since the race had a 40+ year history and surely the organization knew what it would take to file a proper plan, and on race day had not circulated the approved plan to the race officials and volunteers–the course was almost shut down. The race also directed runners to run extra mileage. 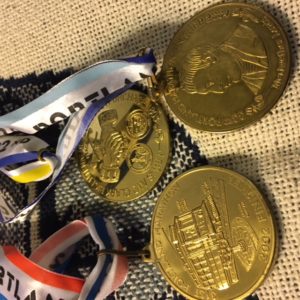 (That op-ed piece from The Oregonian–Portland's newspaper–also documents other problems, including handing the first place trophy to the third place winner. In the end, Oregonian staff called for Portland to find another organization to organize the 2017 Portland Marathon.)

After the 2016 race, the city of Portland forced the course change, supposedly on the grounds that there were not enough Portland police officers to take care of the epic, historic course of the Portland Marathon. (When Runners World is publishing the scoop to the entire running world, that has to hurt registration too.) I'm not privvy to the internal discussions on that, but I have definitely been to races that used trained volunteers and police from other jurisdictions where the host city couldn't supply the number of police the city required. The 2017 almost didn't happen because the marathon organization ignored the requirement for a new course (and I'm guessing did not submit any alternative proposals for police coverage). Just a month out from the marathon, the event did not have a permit. According to that Runners World article, the marathon also still owed a police bill from the 2016 race!

In the end, the 2017 was pretty awful-looking, and I was glad I had not signed up to run. Instead of the gorgeous loop that showed off the best of the city, the course was largely an out-and-back along main roads and the freeway. Yuck. If I had been registered, I would have been pissed, despite the then-director's attempt to spin the course as flatter and faster and even more BQ-friendly. Big ol' bowl of NOPE there.

The 2017 race almost did not happen–surely another cause for declining registrations for 2018. For those who didn't read about it in Runners World (the article is linked above), the city officials and race officials had a terrible working relationship after the 2016 event–no surprise even given the little I know–and by June 2017 the Oregon Department of Justice was investigating Smith. (That's actually what kept me from registering in the first place.)

The Portland Marathon's official statement regarding the cancellation of the marathon and dissolution of the organization is here. I find it is less than transparent, and downright dishonest in some aspects. Can you blame the city for wanting to “move in another direction” after the serious problems in 2016 and the discovery that the former race director embezzled nearly a million dollars from what was supposed to be a charitable group–one that was the face of Portland to thousands world wide? How is it that the Board of Directors failed to notice that the organization was breaking the law? (Smith and his partner, Mamie Wheeler, were the only two officers of both the non-profit Portland Marathon and their for-profit Next Events–creating a massive conflict of interest–in violation of Oregon law. Since Smith had been race director for 30 years and was also an attorney, he definitely knew better.) 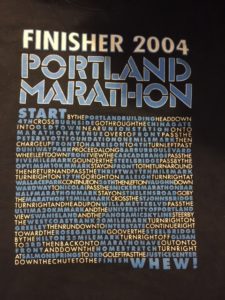 In the face of what amounts to a dumpster fire, I believe the Portland Marathon organization had no choice but to dissolve. It abused the trust (and time and work) of runners and volunteers alike. The city had openly solicited proposals for another group to produce the event. After a rest, I'm hoping the city finds another race director who has the experience and integrity to give Portland the marathon it so richly deserves.

One Response to RIP Portland Marathon