Eeek! I wrote this post months ago and thought I had published it…must have been runner’s brain. Disclosure: I’m a member of the 2015 Rock ‘n’ Blog Team. In exchange for helping promote the 2015 Rock ‘n’ Roll race series, I received some swag and a discounted Tour Pass. To save $15 on any race in 2015 (other than Vegas), use code TrainWithBain. To bring the cost of the Las Vegas half or marathon down to $145, use code TrainWithBainLV.

This is my second year doing the Rock ‘n’ Roll Portland course. In 2013 I ran a PR on a course I swear they made by linking up every hill in the immediate downtown-to-SE area. I used to live in Portland, I know it is flatter than that course! This year it was a new course and a very different trip (I usually try to go for a long weekend, but this was strictly overnight). I flew in early Saturday, returning to my favorite airport: live music, local eats, art…and everyone’s favorite airport carpet!

At the expo, I spent a good deal of time with the super nice people of Portland Running Company talking about the Garmin Forerunner line. I’ve been trying to decide what to do about tracking my running since the Nike+ app decided to stop synching with the website and Bia closed their doors. Ultimately, I decided I really don’t want a heart rate monitor on my running watch (I already own one, and don’t need another), and they only had the 220 with HRM. After the expo I did track down a 220 without the HRM at another running store nearby (the better to buy it on sale, not pay sales tax, and get it during the rebate period).

Most brilliant display, hands down, goes to Toyota.

They made an interactive set-up out of multiple vehicles and assorted iPads and techie stuff. Each car had an activity with it, including one that was a photo booth! (The kid in the picture above this paragraph is looking for accessories.)

Each vehicle also had information about the car, geared towards potential buyers. Once you completed all three activities (there was a “tour pass” you got punched at each station) you could return to the tent and collect your prize: a car charger with adapters for various phones. Brilliant, since Toyota is a car company and you’ll keep this gadget in your car and see it daily.

I also finally tried on some Altra shoes. Since I have a shoe problem, I try not to put them on my feet unless I could buy them. Most running shoes that fit my feet are over $100, and I currently have three pair in rotation (well, one is in reserve right now), but since they had “open box” shoes for $59 (and remember, Oregon has no sales tax), and they had many in 10-11 sizes, I decided to try them on. I’ve been eyeing them for awhile, wondering how much different the zero drop base would feel since I’m already running in Brooks Pure Cadence most of the time. Answer? A LOT DIFFERENT. Apparently I got a dopey grin on my face, probably because it felt like I was walking on pillows! I haven’t taken them out for a run yet (um, they look so clean and tidy…) but I will, soon.

Also at the expo, the Church of Scientology. Ah, Portland. I guess it was to be expected, given that the currently unaccredited Delphi High School–a breeding ground for future Sea Org members–isn’t far away, that Portland is home to a pretty, renovated, historic building turned into an Ideal Org, and that Multnomah County is home to all sorts of fun suits against Scientology/ No, no thank you, I do not want to take a fake “stress test” with your non-scientific gadget that originally used Campbell’s soup cans and must carry a label stating it is not a medical device in multiple states. Thanks for keeping it weird, though. (P.S. The OTO wants the boat back, okay?)

The remainder of the day (and there wasn’t that much left) was a mini-nap with two cute chihuahuas, dinner, and an evening in Portland with some of my Portland peeps, doing stuff I love and miss doing.  Sunday morning came way too early. Yikes.

I’d planned to run, but then discovered my friend Holly was doing the event too. I see her once a year (or less) so I wasn’t about to run just to run–WAY better to hang out with her and walk.

Only it turns out that woman walks fast. So fast that I was actually sorer from walking than I was from the last event I did running! Very glad the weather was cool and I had my compression tights on for support. The course was not the same as the one I did in 2013, but instead spent more time in the neighborhoods.

We almost went by my old building, just missed it by two blocks. Spring in Portland is gorgeous, and I really enjoyed retreading my old stomping grounds. Except for the big hill.

We finished in a relatively un-speedy time, crossed some of the old PDX carpeting made into the finish line, and grabbed snacks and beverages. To my absolute delight, the finish line concert was still going strong! As a slower runner, I am frequently crossing the finish line within a song or two of the concert ending, sometimes after it is over. Not this time–I got to sit on the grass, refuel, and rock out!

Near the end of the concert, I met up with fellow BibRave Pro Allison. This was my first event after joining the Pro team, so it was great to get to meet another Pro in real life! Turns out Allison also lives in an area without a lot of Pros, so it was her first meet-up too.

Just like every trip back to my adopted home, I didn’t want my time in Portland to end. After a shower, and snacks with friends, it was time to hit the airport. Luckily there is now a Cafe Yum! so I grabbed a Yum bowl to accompany my Coffee People mocha, and headed home. 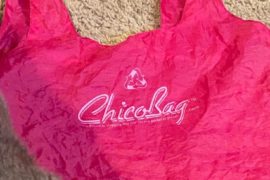