Disclosure: I am a proud ambassador for Represent Running, the series that brought you the Inaugural Silicon Valley Half Marathon. Race ambassadors get some sweet gear and free race entries in exchange for promoting the races. (Of course I was so excited when I first heard about the race that I immediately signed up–seriously, did you see the swag?)  OH HEY, you can already register for next year. Don’t wait CLICK AND REGISTER!

After the heat of the San Jose Food Truck 5k, I was really glad the weather cooled off a bit–especially because the race didn’t start at o’dark-thirty. I also really liked that part. There’s nothing better than a good night’s sleep in a big fluffy bed, and then NOT getting up before the sun to go run the race. (Well, maybe I should have run before the sun got up…SPF 30+ is no match for my vampire-like skin’s reaction to the sun.) At any rate, I strolled from the Fairmont to the starting line, glad to have opted for the downtown San Jose experience. (Also for the CREAM sandwich I ate the night before: birthday cake ice cream on two sugar cookies. NOMNOM.)

First I realized that my bib only had one dot–but it was supposed to have two. See, this weekend was chock full o’ bonus bling: a challenge medal for running both the San Jose 408k and one of the weekend events, and another challenge medal for running both days (the Food Truck 5k on Saturday and either the SV Half Marathon or the 10k on Sunday). One of the other Represent Running ambassadors pointed me to the problem fixer-upper tent, and a minor crisis was averted. (Do NOT get between me and my bling!)

After a bunch of clowning around at the starting line, I started to pay attention to the pre-race speakers. It may be kinda nerdy of me, but I enjoyed learning a little more about the work of the Silicon Valley Education Foundation, the official charity of the race and its mission to prepare every student for college and careers, with a focus on STEM. If you don’t live in the area, you probably think of Silicon Valley as full of rich white guys–and it is, but there is also a sharp contrast between that impression and reality, which is that plenty of kids need help. It’s an expensive place to live, and there is food insecurity even among people who work “good” full time jobs. You can learn more about SVEF (and throw in some bucks!) here: https://svefoundation.org/donate/  There was also plenty of local love for bringing a big run back to downtown San Jose.

Out On the Course of the Silicon Valley Half

Speaking of a big run, San Jose has many running events throughout the year, but the Silicon Valley Half Marathon course was NOT a copy-cat course. Sure, it had some of the same streets, but the course itself as a whole was brand new. I particularly enjoyed the areas in the neighborhoods and near parks and schools. as it was quite warm and I needed shade! Every one of the water stops was fully staffed by great volunteers–this was not the kind of race where half of the water stop spots are filled by teens glued to their iPhones.

One of the fun things about an inaugural race is that you get to create all of the race stuff from scratch. Ordinarily, I don’t care about mile markers. (Frankly at most races they all look the same and are generic.) But there are lots of runners who selfie it up at every mile. So why not make the most of those selfies (since you know they’re going on Instagram)? The Silicon Valley Half Marathon made great mile markers, themed to various aspects of life in and around San Jose. Unless it’s a Disney race–where each mile marker is themed and plays music–I don’t take mile marker pictures…yet I have almost a complete set from this race.

Given that it was hot, and I was feeling tired even after luxuriating in my fluffy bed at the Fairmount, I knew I was not gunning for a PR. I started with the intent to run about half, and walk the rest. For the first few miles, I was leap-frogging with the 3:00 pace group. Around mile 4, I decided to tag along. Mad props to Too Legit Fitness for providing amazing pacers. (Seriously, go follow Too Legit Fitness on Instagram.) While I ultimately decided to slow my roll at mile 7 or so, the pace team kept me going on the 3:00 pace up to that point. I’ve only ever run with one other pacer I loved so much, but this race had a team! Like not just one runner with a sign looking at his watch. I don’t have any official scoop here, but there were two women passing off the timing stick, and their gigantic fan club/run group. It was super motivating! Also, there were a few additional people from the pack who checked in with everyone else who was running, handing off a little snack here or a sip of water there to make sure that everyone was still moving forward.

Setting The Pace: Too Legit

The pacers were so awesome that after each pace team finished, the pacers went back out onto the course to cheer in more runners. This might not matter at all to you if you’re a sub-2:00 runner, but for those of us in the “back of the pack” (you know, the ones most races ignore and forget to feed, or let the sponsors pack up and go home before we finish?) it was a really great perk. Starting about a half mile from the finish line, there were pace team members cheering and jumping around. Some took the time to walk or run for a block or more with incoming runners. It was really cool to see the pace team out there, after running a half marathon, still out there encouraging everyone.

After the race, runners were treated to a post-race beer (actually I used mine to get sparkling wine–even better!) and live music. Lululemon provided little totes for each runner, which made it much easier to juggle the bling, banana, snacks, and bottled water at the finish line. The park was ideal for picnicking, and there were food trucks (and not the same trucks from the 5k but an entirely different set!). Plenty of runners brought their family and friends out to enjoy the music and food and beautiful day.

Thinking about the 2019 Silicon Valley Half Marathon? The inaugural event rocked–so sign up now! #SVhalf #RepresentRunning

Other runner perks included a long-sleeve quarter zip (instead of a race t-shirt) that I just love (it’s a teal colored Leslie Jordan brand, super soft–you can see it on some of the folks in the starting line picture above), a sweet duffel bag, and FREE race photos, courtesy of race sponsor Amazon (who also had a photo booth on site, along with free sweat towels).

The park also had booths from all of the sponsors, and from local vendors selling both running-related items and items of general interest. Sparkling wine sponsor Barefoot had a booth tasting their new canned sparklers, in addition to beer and wine for sale at the beer tent. It made for a fun and relaxing afternoon.

On the plane home I started to think about the Silicon Valley Half Marathon 2019. Since the inaugural event had zero noticeable flaws, I’m sure word will get out and there will be many more runners in 2019. You should be one of them! Come join me–I’m going to register ASAP. (Note: you can actually register right now!) 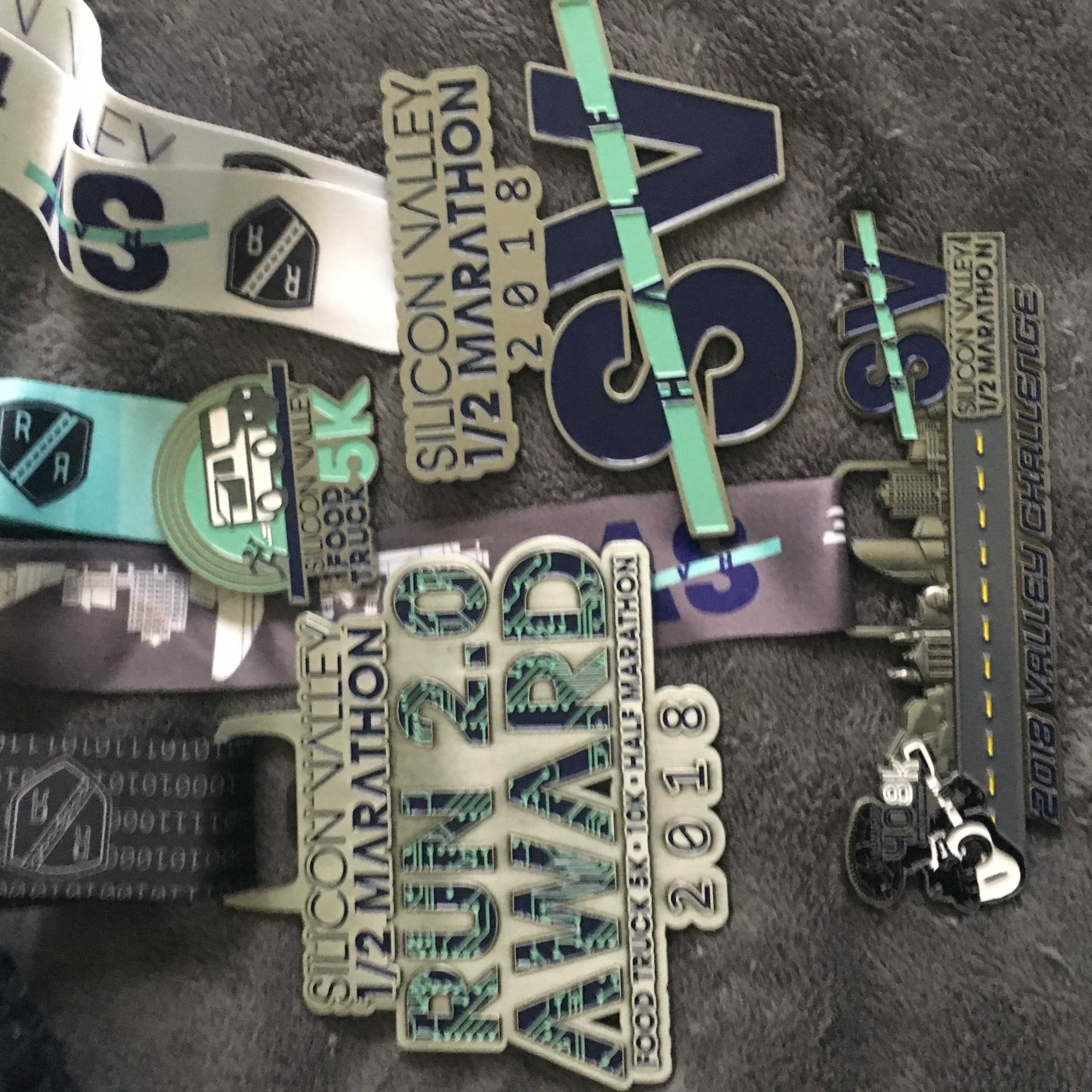