I'd love to have Thanksgiving all year. Well, maybe not the endless food parade, since it is definitely indulgent (and generates a lot of dishes, too!). The parts I like the best do revolve around food, but only because my family likes to eat, and pretty much all of us like to cook.

My favorite Thanksgiving moments all involve laughing, and much of that laughing takes place around the table or in the kitchen. When the Three Stooges assemble (that's me and the brothers), hilarity ensues. In 2011, I brought home my first iPhone. I'm pretty sure I took more pictures of the dog than I did of the family, but here are the highlights. 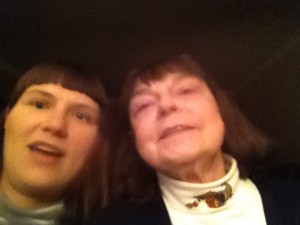 This is my first selfie. You can tell, because I hadn't learned that you never look down at the phone. (If Mom were alive, she'd kill me for posting this picture.)

Why yes, I do have a weirder neck than the turkey that graced the table that year. Centering? Filters? Editing? Retakes? Yikes. Onward and upward (you're supposed to look up at the camera!). 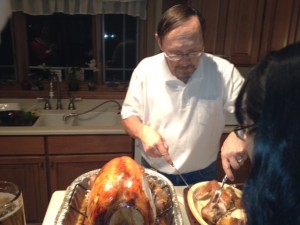 Traditionally, it has been Dad's job to cook and carve the turkey.

Thanksgiving dinner at our house must always include certain items: turkey, stuffing, mashed potatoes, vegetables, cranberry sauce (the kind that comes in a can) and bread. (Why yes, I did grow up in the Midwest!) Over the years, traditions evolved around past events. Required commentary included asking Mom ten times whether she remembered to take the rolls out of the oven, mocking the cranberry sauce shaped like a can (the one year I mashed it up, one of my brothers yelled at me), asking Bruce to go put the leftover turkey in the workshop, and reminding everyone to feed green bean innards and corn kernals to the pet cockatiel (still thriving at age 23). 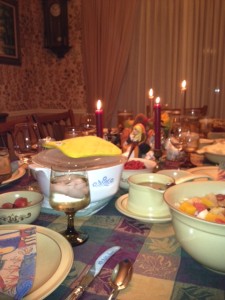 We used to haul out all the china, but after Mom got sick, we decided to use the everyday dishes. Why? One word: dishwasher.

There appears to be some kind of prohibition on leaving any empty space on the table. Part of the required commentary is advising others on how to rearrange the food so it will all fit for at least 10 minutes, at which point we all give up and stick some of it on another piece of furniture (preferably one that is too high for the dog to reach).

This is how Bain does Thanksgiving! How about you? 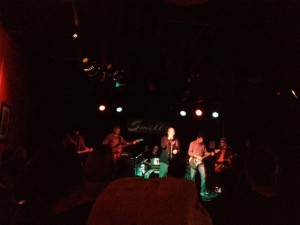 What? You don't recognize the world-famous band, Cruise Italy? (This is literally the only photo I took that year. What's up with that?)

There is also a required program of entertainment. I was shocked when we ended up deviating from it this year, but the typical day goes like this: get up early to stick the turkey in the oven. Drink lots of coffee, while claiming that not eating breakfast will make it easier to stuff ourselves at dinner. Hang out and catch up. Start drinking beer. Give in and eat lunch, then start picking on random snacky things while watching the Lions lose a football game. Start drinking wine. Eat dinner. At some point the brothers disappear to the basement, where they play Intellivision for hours, and you can tell which games they are playing by the sounds emanating from the basement–not the ones from the games, the sounds from the brothers. Eat dinner. Pause. Round two. Then we have Christmas. 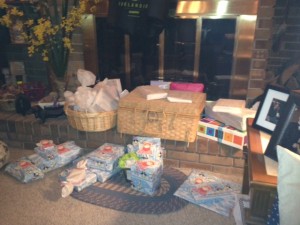 So it goes, from year to year. Some years we have Christmas on Saturday morning. Once the three kids moved to three different locations, and I hit the west coast, it just got too expensive (airfare!) and impractical (a day off work to fly each way) to do two separate holidays. Thanksgiving was the first time I met the then-to-be-sisters-in-law. It's sort of the acid test: if you can't hang with the siblings, you're not going to cut it in this fam.

Thanksgiving without Mom isn't the same. If you've lost a parent, you know what  mean.

In 2014 I decided to try something new: go run the Detroit Turkey Trot, even though no one else in my family would have anything to do with it. (One brother is just not getting up that early on Thanksgiving, the other insists he's not paying anyone and he can go run 10k whenever he wants; the sisters-in-law don't run; that leaves Dad, and someone has to cook the turkey.) It was the 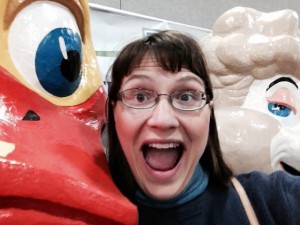 Registration for the Detroit Turkey Trot comes with the opportunity to selfie with the giant heads from The Parade Company. (See the improved technique?)

I took a billion pictures, you know, “for the blog,” and notice how I reviewed the 2014 Turkey Trot on the blog? (Don't go looking for that review…) 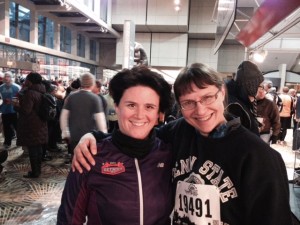 This is the first time we'd seen each other since…like 1996.

Funny thing about Thanksgiving: the more ways we have to take pictures, the fewer pictures I have! I'm sure I could dig hundreds of pictures of Thanksgivings past out of the basement in Dad's new condo. I bet there are several table shots from two houses ago, the year that my brother and my cousin broke the decorative wood off of the front of the china cabinet. Yet I have none with my friend Michelle (who I see every year), and fewer than a half dozen from each year on my phone. Hm. 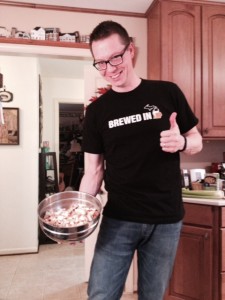 It's White Castle stuffing. No, I am not making this up.

The last Thanksgiving in the house was special for many reasons. (I wish I'd known it was going to be the very last one.) At several points there were seven of us in the kitchen cooking. It was also the year that me, the vegetarian, accidentally won a turkey during the #CompleteYourFeast twitter contest. Oops! I've got to say that I've never had customer service like we got from Diestel Turkeys, and I wasn't even a proper customer! After I won, a few quick emails back and forth got the home address connected with the turkey, a 15 pound Organic Heirloom Turkey (which I'm told was uber delicious). Tuesday I got a call from Heidi–yes, Heidi Diestel!–to let me know that the turkey's plane was delayed, and I should call immediately if the turkey wasn't the proper temperature when it arrived (they'd express another one). The next day, she called again to make sure the turkey had arrived in good shape. (I was napping, so she talked to Dad, who was very impressed that I'm somehow important enough to get a call from a Diestel!) 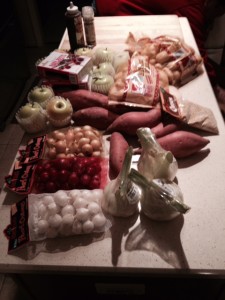 Overview of most of what was in the box–it barely fit into one shot, much less one meal!

The twitter chat contest also included a box of produce from Melissa's Produce. (Honestly, when I stumbled into the #CompleteYourFeast twitter party, I was hoping I'd be lucky enough to win one of the runner-up prizes, like a cookbook.) There were apples, dutch yellow potatoes (the BEST), small onions in every color, fennel, sweet potatoes, white potatoes, steamed and ready to eat beets, two packages of quinoa, fancy salt and seasonings, and even an dessert sauce! Dad had already bought some produce, and we had no idea what might show up in the box, so it turned into quite the feast. Fennel was a new one for me, so I made one of the recipes I found on the Melissa's website; same with the quinoa. 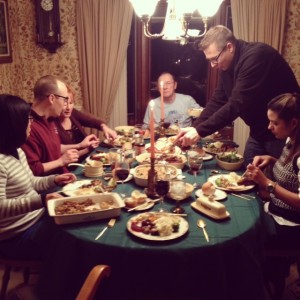 A portion of the resulting feast.

There's an old funny story that ends with, “here comes Bain with a second load!” and that might as well have been our motto last year. It was the first Thanksgiving meal we shared with Dad's new fiancée (she passed with flying colors, and baked enough pie for dinner and breakfast–very important!). 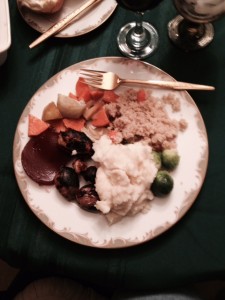 We all ate ourselves silly. The post-dinner interval lasted much longer than usual, as we all wanted to eat pie, but none of us could figure out how on earth we'd manage to put more food in. Per our tradition, we spent “Black Friday” sleeping in and then hanging around at home while eating everything we had for dinner the night before.

This year was the first year the brothers and I have eaten the family Thanksgiving dinner in anyplace other than our childhood home on Moonlight Drive (we moved there in 1979). We've had a few “moveable feast” Thanksgivings, where we had Thanksgiving the second weekend in December, for example, or the week before the actual holiday, but never in a foreign location. It turned out just fine. 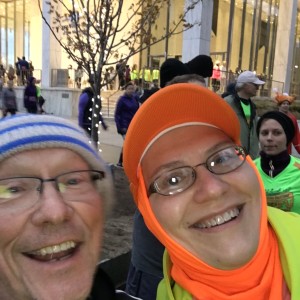 Sporting my BibRave orange at the Detroit Turkey Trot.

First, I convinced Dad to join me at the Detroit Turkey Trot. (Note the evolution of my selfie technique.) Ellen wasn't so sure this was a good idea, since he'd decided to tackle the Detroit International Half Marathon on four training runs no longer than six miles, but I promised I wouldn't let him injure himself. We did 1 minute intervals, walking and running (“jogging,” said my brother, “with a soft J”). In between viewing the amazing architecture of the Detroit that once was one of the richest cities in America, I played Ingress, we watched multiple groups of costumed runners (the ghostbusters, turkeys, turkey dinner, and all sorts of other things).

This year there were two turkeys, all the things my family usually had (but not the White Castle stuffing–Bruce was on strike), the fluffy marshmallow and oranges thing, sweet potatoes, Brussels sprouts, green beans, two kinds of stuffing (including some vegetarian stuff not cooked in the bird for me), and another dozen dishes that didn't fit on the table. 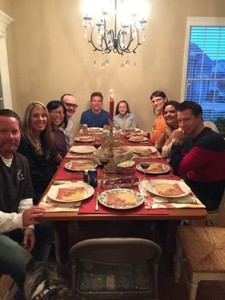 Most of the dinner, and all of the company–the host and hostess avoided getting into ANY of the pictures!

We shared dinner with Ellen's daughter and her family, using all of the counter space, all of the chairs, and most of the dishes. The brothers never did hook up the Intellivision, but that might have been because the football games were so exciting. We were all in shock that the Lions won, and then the Chicago/Green Bay game kept us up well past when we wanted to go to bed. Thais is still doing her American residency, so she had to work on Friday, meaning there was less wine drinking and laughing until all hours. We only made it through one pie. 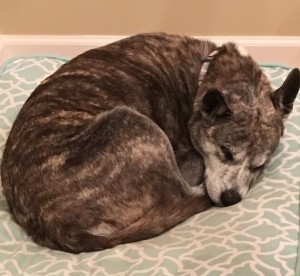 Phoenix, exhausted from exuberantly greeting every guest and attempting to mooch from every plate

It was a good year to start some new traditions. (I wonder if the Intellivision will come out again next year.) I could do this every weekend! Well maybe not every weekend, that would put a serious dent in my running calendar. How about once a month?

What do you like best about Thanksgiving? Does your family have any traditions you love (or hate)?

One Response to Thanksgiving All Year