So 2013 was my year of crazy running: between January 20, 2013 and January 19, 2013 I ran 31 half marathons. The magic number 31 landed me on Earth in the Half Fanatics club. Along the way, I learned A LOT about running. During 2013, Skechers generously offered to let Women’s Health Action Heroes choose a pair of shoes from their new Go collection of performance shoes. If you read any running magazines or health magazines (and you must, because you landed here, right?) you’ve probably seen the ads for the Skechers Performance line of running shoes, endorsed by none other than Meb Keflezighi. When I first saw these ads, I associated Skechers with skateboarders and those rocker-bottomed “toning” shoes, and was a bit dubious that they could turn out running shoes worth my time. (Running shoe design is more complicated than you might expect, and I’ve spent a lot of time poking at them and reading about them and trying them out to learn how they are put together and why.) Yes, just a year of running “for real” turned me into a bit of a shoe snob!

I was taught that accepting a gift honors the giver, so I set aside my preconceived notions about the Skechers brand and wear-test some shoes. At that time I was pretty much married to my running shoes, so I chose the Skechers Go Bionic, which are trail running shoes. Marathon Matt, the coach of my running group, had recently started Sasquatch Racing trail races, and Brazen produces at least two dozen trail races per year, so I thought the Skechers Go Bionic would be a great incentive to get me out and running on trails. I selected the Skechers Go Bionic in pink or purple (we even got to choose the color, isn’t that sweet?) and asked for a size 10.5 since that is what I wear in every other running shoe on the planet (despite the fact that I wear a 10 in regular shoes). Since most of why I love racing has to do with being outside, I couldn’t wait for them to arrive!

Not long after, a huge box from Skechers arrived. I immediately ripped it open and was puzzled to find two pairs of shoes inside (one pink, one purple) in sizes 9.5 and 10. The bottom fell out of my tummy for a moment, because I sincerely feared these adorable shoes wouldn’t fit my amazon feet. Surprise! Not only did the 10 fit fine, I could wear the 9.5 too! Since any runner who has ever run a distance race should tell you to NEVER race in a pair of new shoes, I wore them to work (hooray for a casual-dress policy!), varying the socks I wore with each. The 9.5 were best with Wright’s Double Layer socks (my one true love), while the 10s were best with slightly thicker socks or Injinji socks (the kind with individual toes).

Somehow I just didn’t make any trail runs. The one day I thought I’d go on my own, without a race, I ended up stuck in my office. Excuses, time passed, until I had to find a mere three races to finish my 31 half marathons in 365 days. There are not a lot of half marathons happening in the limited window of time I had available (basically Christmas to New Year) and the nearest options were all trail runs. Without thinking about it too much, I signed up for the Brazen New Year’s Eve (actually held on Saturday, not New Year’s Eve itself) and Brazen New Year’s Day—run both, and you get a cool extra medal linking the two races together. Troy’s Trail Run through Almaden-Quicksilver regional park (a former Mercury mine and surrounding environs) was the last race I needed to make 31. I figured it would be just like a road race, only with gravel and dirt.

Trail running, as it turns out, is NOT for wimps. 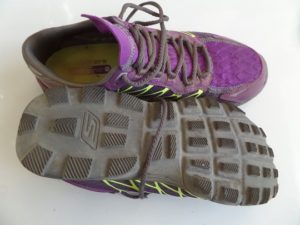 For the New Year’s Eve race, I decided to try the royal purple 9.5s with my Wrights. They got a little bit of an extra workout as I was literally picking up my bib when the gun went off. Oops. The Skechers Go Bionic had a nice ride for the entire run, which included several sections on blacktop, some on a pretty rough/raw trail with tree roots and rocks and all, and a few areas of well-packed trails (the kind you could easily push a stroller over). The best part of the shoes is that despite how amazingly sturdy the soles are—my hiking shoes have similar lugs–they weigh practically nothing. The design cleverly avoids two of my pet peeves with running shoes. First, the tongue is connected to the shoe so it can’t waggle from side to side while I’m running. Second, the top most portion of the tongue is pretty thin, so it does not bunch up and annoy me. As an added bonus, the laces are a bit wider at the second grommets than they are at the first or third, preventing me from over-tightening the laces and cutting off the circulation in my toes (which is, sadly, something I often do). The only problem I had was running downhill. Up was fine (let’s be honest, there was not much running involved on the uphill!), but on the downhill my toes smashed into the end of the shoe. Lesson: the 9.5s fit well, can be worn casually and feel great, and are awesome on all parts of the trails EXCEPT downhill. I decided to wear the hot pink 10s for New Year’s Day (and also to start in the hikers division—an hour early—because while I’m never first, I’m usually not quite so close to the end of the pack). 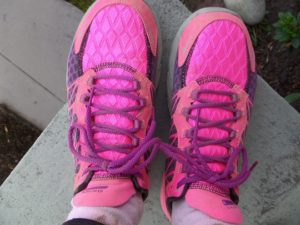 New Year’s Day I chose pink Injinjis to coordinate with the hot pink Skechers Go Bionic. (Note to self: buy black socks. Trail running is messy.) The course was the same loop at Lake Chabot, only in the opposite direction; this actually made the race MUCH faster for me (40 minutes!) but put the 10s over the same terrain as the 9.5s. About half way through the run, another runner complimented my shoes and mentioned she was looking for new ones. When I told her they were Skechers, she was surprised—she had skaters and rocker shoes in mind too—and we had a lengthy conversation about what makes good running shoes. (In the end, I think she ran off to buy a pair. Or maybe she’s just a faster runner than I am.) Unlike the 9.5s, the 10s were perfect for me on the downhill. When the hills are steep, there is pretty much no way to keep your feet from sliding a tiny bit in your shoes. Unlike the 9.5s, where my toes bumped the end, in the 10s my toes had plenty of room to slide forward without hitting the end of the shoe.

Overall, I’m tickled pink (and purple, for the 9.5s) that I had the opportunity to try Skechers Go Bionic, and plan to wear them for my next trail races in 2014. They are lightweight, well designed, rugged, comfortable, and cute (in the colors, at least). Despite the minimal non-running break-in period, I did not have any blisters or hot spots from the Skechers. The shoes got dusty and muddy, but nothing stuck to the soles and they clean off very easily. Bottom line: if you are looking for trail shoes, do not overlook the Skechers Go Bionic.