Integrity Statement: I’m a proud member of the 2015 Rock ‘n’ Blog Team! In exchange for blogging about the 2015 Rock ‘n’ Roll events, Team members receive certain perks, including a limited number of free race entries. You can save $15 off any marathon or half marathon in the United States and Canada by using the code TRAINWITHBAIN. (Offer not valid on Las Vegas, sorry! I hope to see you there anyway.)

Since I ran the New Year’s Double marathons on December 31 and January 1, and then did the Disney World Marathon as part of the Dopey Challenge the next week, it seemed like a great idea to sign up for the Rock ‘n’ Roll Arizona marathon the next weekend. (Why yes, I might be crazy.) After all, there was something important at stake: the very last opportunity to earn the Desert Double Down medal. 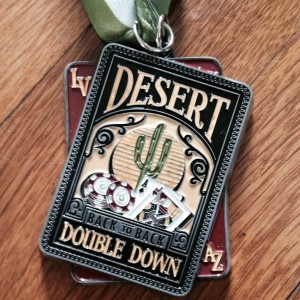 Actually I’d never really been to Arizona (other than a work trip to Lake Havasu City, and passing through the airport, which I don’t think counts). Since Arizona was the first Rock ‘n’ Roll event of the year and my first opportunity to run as a Rock ‘n’ Blog team member, and there was an Arizona Remix Challenge, and I could get the last Desert Double Down (since I ran Las Vegas), I REALLY wanted to run it. Then I managed to talk my friend Jackie into running it with me (because she’d just done the Dopey Challenge too, and clearly needed to run another marathon) and also let me crash at her place, I had to do it!

Jackie met me at the airport and we went straight to the Expo. Though I’m usually photographing everything, I managed to take just one photo with my camera all weekend. Impressive, right?

The Remix Challenge is two races, the 5k and then either the half or marathon, so we had to pick up two bibs. Fortunately there were no lines, so we each had two bibs and two tech shirts in hand pretty quickly. (I’ve actually never stood in line for more than a few minutes at any of the Rock ‘n’ Roll races I’ve done, except for Philadelphia.) We drooled over the cute race merchandise but didn’t buy any. Remember, we just did the Dopey Challenge the weekend before. (Read: we left all of our money with the mouse).

The rest of the Expo was fun. It’s a little bit like being at a runner mall, with games and prizes. We tasted some delicious sangria from P.F. Chang’s, the title race sponsor. The other big highlights for me included restocking Nuun (I’m a #nuunbassador for a reason!) and scoring the new Rock ‘n’ Roll water bottle design while discovering the “tropical” flavor might just be my new favorite; and trying out the R8 tool by Roll Recovery. I’m a fascia tool nerd, and even though there is essentially just one technique with this tool after trying it I had to have it. Peace out, my hammies are happy.

We spent the evening chowing on Chipotle and lazing about the house, where I met the furry members of the family. Spotty kitty was a little too high-strung to become my new bestie, but her mother is the softest, friendliest, chummiest little furball ever. It broke my heart to learn her life started out rather terribly, and Jackie found her living in a dumpster all super skinny and with a litter of kittens. Poor dumpster kitty! I don’t see how anyone can be so cruel! I’m so glad little dumpster kitty found Jackie, as her life is immeasurably better now (plus she’s a total snugglepuss).

The 5k had us up earlier than I like to be up, but not “Disney early” (which is around 3:30 or 4 a.m.). We’d decided to use this as a stroll; no need to over-exert or tire out before the marathon. The morning started out chilly and windy, but warmed up by the time we meandered across the finish line.

After collecting the 5k medals we had the opportunity to meet and greet some running greats. The Rock ‘n’ Roll series has had Meb running with us in various races through the last year, and this year even more racing greats are joining the races–with meet and greet opportunities before and after some races. Here’s just one:

Every good event ends with food, so we went to Snooze for brunch. (Read about them at http://snoozeeatery.com) The menu had so many tasty-looking options that I probably could have eaten there for a week. Sadly, I had but one brunch to eat. If you’re in the Phoenix area, you’ve got to try their Huevos Rancheros. Also, coffee. OMG, the coffee.

From there we attempted to make the #RocknBlog #TweetUp. Unfortunately, since we’d enjoyed brunch for a little longer than maybe we should have, and decided to change into fresh clothes and throw on a little makeup so we didn’t scare people, we missed the whole thing. (We were only 45 minutes late…)

After fondling the new Heavy Medals, we headed over to the Arizona runner-bloggers meet-up. While I’m not sure about living in the desert–the morning-freezing to noon-frying to night-freezing temperatures might just be a bit much for me–I know I’d love to run with this crowd! After some initial meet-and-greet there was a raffle with some awesome prizes, from Nuun, SunRype, Girls Run Fast, StartLine Racing, and local yummy real food tasty treat HuppyBar. I scored $25 to Fleet Feet Sports Scottsdale, one of the generous sponsors of multiple #RunEatTweetAZ meet-ups.

Then groups of us headed off to lunch at the surrounding restaurants. The tweet-up had too many people to head to one place, so we split up a bit.

I feel like I spent Saturday eating…we got back to the house just in time to laze about a little, eat some dinner, and head to bed early.

Marathon morning came too soon (it always does!). There was an impressive amount of traffic trying to park at the finish line (which I think was also the start line for the half marathon), so much that the freeway was at a standstill. We opted to park a little further out, near one of the light rail stations. (I do have a major soft spot for quality public transportation.) The marathon start was MUCH smaller than I’d expected. I’m used to Rock n’ Roll events having thousands of people at the starting line, and volunteers trying to make sure you get into the right corral. The marathon starting line was very tiny, and there were basically no corrals. I was somewhat amused to see a runner in front of us wearing full make-up reapply her lipstick (really?) as we waited. It was chilly, and I had borrowed a toss jacket to keep warm.

Initially, I figured Jackie would finish about 90 minutes before me. The plan had been for her to take off and see what she could do, and for me to slug along with my 1-2 intervals. Only I left my Bia in California (so I had no interval timer or even timer-timer). Oops.

The race started off with music, cheering, signs, and all the crazy you’d expect for a marathon. The first few miles had a lot of people cheering, which surprised me since it was pretty early. Overall, given the smaller number of runners and the early start time, I’d say there was a decent spectator turn-out for the parade. One unofficial stop had some kids handing out chocolate, super cute! I stopped to pet a few dogs, and otherwise just kept motoring along. This was my second marathon in my Marathon Maniacs singlet, and I was thrilled to have so many fellow Maniacs pass by! (Part of the reason I bothered with Half Fanatics and Marathon Maniacs is that once you are a member, you’re never really alone at a race.) I also got several shout-outs to Orange Flower, which at least one person on course had seen both in Texas and at Disney.

Around mile 12 or so I started tagging along with a runner whose watch was beeping intervals. The sun was up and so was the temperature! It wasn’t unreasonably hot–I mean, I knew I was going to run in the desert and all–but the ice at the aid station was a welcome sight. We chatted as we ran. Part of the fun of running is all the neat people you get to meet! Turned out I was tagging along with a runner chasing the 50 States Marathon Club–she’d already done about half of them!Somewhere around mile 18 or 20–let’s face it, all the miles around there are like the same mile over and over again–we ran into Jackie, who had found and befriended the sarcastic runners’ posse. She joined us for some miles of intervals (oh right, we were doing 25-55) and then we passed the unofficial beer aid station (two dudes, a cooler, and a sign that said “free beer”…bet you wish you were there, eh?). The intervals continued until…I’m not sure where, when we were temporarily too pooped to run as the beep went off. We shouted our goodbyes and continued rambling.

Per usual, somewhere between mile 22 and mile 24 I was 100% over this marathon. It was starting to get hot enough to feel hot, yet still not totally oppressive. What was totally oppressive was the hill that jumped into the course somewhere around mile 25. I’m not a fan of hills at any point, but it seemed really obnoxious to “hide” one right near the end!

Eventually we got over it.

The finish line still had a cheering throng, even though all of the half marathoners had long since finished and the crew was already packing up some of the post-race festival that had been going on in the park. (I’m NOT slow, I’m cheap; I had totally maximized the value of that entry fee, thanks!) It was great to hit the finish line and collect a marathon medal! Rock ‘n’ Roll Arizona did a great job with the finish line food, and there were still plenty of bananas, pretzels, water bottles, Gatorade bottles, Power Bars, fruit cups and other treats. If you are a speedy runner, you probably find this is always the case, but for those of us who have a more leisurely pace, we sometimes find the finish line food gone; at one race after I went through the chute and found nothing but bananas, I saw a runner who’d clearly finished quite some time ago with an entire backpack full of finish line food. Not cool. Don’t be that self-centered guy! 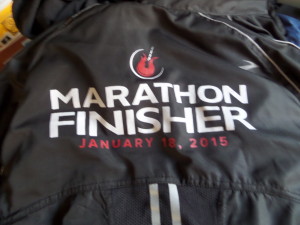 Happy to have some snacks, it was on to collect the bonus bling: the Arizona Remix medal for each of us, and the last Desert Double-Down for me (since I ran Rock ‘n’ Roll Las Vegas). Then we collected the marathon finisher jackets. These are lightweight, mesh-vented warm-ups, maybe even subtle bragging wearables for a summer evening with a mild breeze. I think it is a great touch.

Overall I really enjoyed the Rock ‘n’ Roll Arizona marathon experience. I would definitely do it again–well, since I am thinking this marathon experiment is over, maybe I’d stick to the half. If you’re thinking of a trip to Arizona to run, this was a great time of year to be there. Nights and early mornings were chilly, but the days were not disgustingly hot. If you go, be sure to check out Fleet Feet Scottsdale, and hook up with the #RunEatTweetAZ community. It seems like there are a lot of running events even in the summer (just those start earlier or much later!).

P.S. January is also the month of Rock ‘n’ Roll New Orleans! I didn’t get to run NOLA (this year, anyway) but here’s a great review from another member of the 2015 Rock ‘n’ Blog team: Through Heather’s Looking Glass