This past weekend was runDisney’s Glass Slipper Challenge: a 10k on Saturday followed by a half marathon on Sunday. Since I swore I’d never run another Disney race after getting up at 4:00 a.m. for the Tinkerbell Half Marathon in 2013, naturally I ran both races…with a giant orange flower.

1. Small Children Fear and Admire You.

It started in Epcot, when a little princess stared at me then suddenly turned to her mom and asked, “Mommy! Why does that lady have a flower??” Several other princesses, super heroes, and assorted painted faces did something similar over the course of the weekend. At Disney’s Hollywood Studios, one little girl walked over to my table and started to pet the fuzzy stem, so I let her hold it for awhile—it was taller than she was! Unfortunately she didn’t speak English or Spanish, so I’m sure the strange noises coming from my mouth only made the experience more surreal for her. For the kids who did understand when I tried to talk to them, the group was evenly split between (a) kids who looked at me like I might be the coolest adult ever, and (b) kids who looked at me like I might gobble them up if they didn’t duck behind their parents post haste.

During the 10k only one runner asked me whether I was a pacer, so I didn’t think about it. (One also asked if I was a “balloon lady,” aka the “you’d better get ahead of me or you’ll get swept” sweethearts and/or meanies, depending on your experience. Which would have been weird, since I started in the middle of NOT the last corral.) During the half marathon, at least a dozen people asked some variation of “are you a pacer?” or “what pace are you running?” At first I just said “I’m not a pacer, but I’m running 3:30ish.” (I came in at 3:23, so that’s fair.) After the first six or so I tried to make up funny answers, but never got anything better than “I’m running the fun pace!” and “I’m the ‘stop-to-pet-the-puppies’ pace!” (Literally, at the Oakland Running Festival half marathon I did stop to pet a super cute puppy.) Take-away: I can’t be funny on the run.

3. Runners Who Don’t Ask Make You A Pacer.

Let me be clear, I never, ever told anyone that I was a pacer and for anyone who asked, I made it clear I wasn’t. Honestly, all I did was carry around a big, orange flower—I wore my regular running gear, even though the color scheme made it look like I got dressed in the dark (oh wait, I did). That said, during the half I met quite a few people who thanked me for pacing them through the 10k the day before. “Oh, I just followed you for the entire race,” one said. “I made great time.” This was extra hilarious to me because I hadn’t run a single step since the finish line of the Tinkerbell Half Marathon, and I was just enjoying what it felt like to run while still following my somewhat arbitrary running rules (e.g. I don’t like to run hills; so I don’t).

4. Giant Flowers Make You Invisible To Your Friends.

At both races the other runners, volunteers, and spectators all commented that they liked the flower. A number of people insisted they could never carry a flower for an entire race. (Honestly, it doesn’t even weigh half a pound. The hardest part was reminding myself you’re not supposed to have a death grip on anything while you’re running.) The main point of having the flower was so that my friends—spread across multiple corrals—could find me on race day. I thought it was a brilliant idea. None of them found me by spotting the flower. 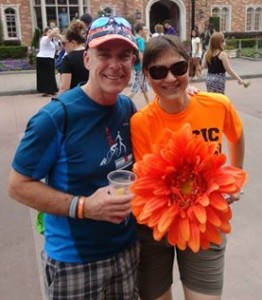 True confession: the giant flower was a last-minute purchase. My race-roommate needed something to repair her costume, so I found myself in a craft store the day before the races. The store had a display of ridiculous oversized fake flowers just before the check-out stands, and I picked one up for giggles. Then I saw the ridiculous oversized fake flowers were 50% off, so naturally I had to have one. Flower, $8. Entertainment, Priceless.

Tweet: Who was the runner with the giant orange flower? http://www.trainwithbain.com/a-giant-orange-flower/