A few weeks ago, just before getting my Thanksgiving feast on, one of the local racing companies sent me an email about their upcoming races, and included the following invitation:

Since I was intrigued by FlyWheel already–I’d heard about it, but never tried it–and the price was right, I decided to RSVP. Now I’m not a cyclist of any kind (unless toodling around Alameda on my no-speed red cruiser bike with the built-in baskets counts), despite being a proudly certified Real Ryder instructor.  Cycling is way the heck out of my wheelhouse (har har har). But I keep going back, in equal parts because (1)  I know some day I’m going to get talked into a triathlon, (2) everyone keeps telling me that cross-training in another discipline is a good idea, and (3) as a teacher I recognize the importance of doing things I suck at so that I can empathize with my students. Still, I don’t like it. I don’t even Facebook-like it.

From the minute I walked in, I knew that I was in for a completely different fitness experience. First, it took exactly zero minutes for one of the Flywheel staff to welcome me and get me started with the check-in process. Assuming you made a reservation before class–a good idea, because there are a finite number of bikes–you check in on a tablet. (See the schedule up there? You can make another reservation too!) It tells you your bike number (yup, assigned seats!) and you collect your cycle shoes from the appropriately numbered slot below. While you can bring your own, every Flywheel class comes with free use of the shoes and towel service, plus all the filtered water you can guzzle. During check-in you can also confirm whether you want to be on the “Torq Board,” an electronic display system that lets you compete against other riders (if you want). The front desk has hair elastics too, in case you forgot to bind up your locks. After a quick studio tour, I went to the locker area to store my stuff. Flywheel has those modern electronic lockers, the kind where you choose your own PIN to lock and unlock it each time.

To the right of the lockers there is a white board where you can jot down which locker you chose, since it is likely to vary each time. I tell you, they did NOT miss a beat!

While waiting for class to start, I checked out the retail area, populated with cute Fly-gear. Or is that fly Fly-gear? Dunno, I’m not cool enough to wear most of it yet.  Anyway, there is also a map outside the studio door so you can figure out where your bike is.  The bikes do have little sticker numbers on the front stem–which I understand the cool kids refer to as a “head badge”–but it is nice to know where you are going before you get there. I also talked with some of the other newbies (that was all of us except for one or two people who I think were Stanford students from back East) and we were all nervous.  “Just don’t point and laugh when I fall off the bike, okay?” I asked them. The doors opened, students left, the doors shut.  We waited some more. The doors opened and a crew with wet mops and cleaning supplies emerged.  I thought, Holy crap, what I have I voluntarily agreed to do? How carefully did I read that waiver??  But it was too late to turn back, and in we went.

Once inside, I took a quick look around. The room was set up like a tiny auditorium, with a little elevated stage in the middle with the instructor and the sound system. There was a center aisle leading to the exit. On either side the room had three rows of bikes. The room was mostly black, with a huge flat-panel TV/screen hanging from the ceiling on either side (the “Torq board”). I’m one of those people who will always choose the aisle seat/spot in class, but I didn’t mind being in the middle at Flywheel.  It was plenty spacious.

For my first ride, I got help setting up my bike. Since they are custom made for Flywheel, I wanted to make sure everything was properly adjusted. Frankly I also needed help figuring out how to put my shoes into the pedals and get them back out again. The Flywheel staff was really helpful, and took all my newbie questions in stride. The bikes resemble other stationary bikes in the Spinning style, except for two features.  One, there is a little rectangular dashboard on the left side, above the wheel and below the handlebars. This is the “tech pack” (I thought it was the “tech deck,” but the website just corrected me!).  It displays the torq (basically how much resistance you’ve added to the bike) and your power output, both current and what you’ve done in class so far.  If you are participating in the Torq Board you can see your total power output up on the board, but even if you aren’t, you can view your class performance online in your private account after class. Your account includes specific data for your last few rides, including an estimated calorie burn, as well as aggregate data over your last ten rides.  (There are prizes for hitting the 3000 mark in a single calendar month, in case you need an incentive. For me, that would take like 20 classes. Maybe I’ll try that next summer.)

Two, there are two blue-tipped bars in special slots on either side of the wheel.  If you’ve ever worked with a Body Bar in a gym class, this is the same idea (only a little shorter).  While waiting for everyone else to set up I put my water bottle in the handlebar-mounted cage, draped my towel over it, and played with the knob to adjust the torque and with various positions on the bike.  Oh, almost forgot to mention, you can also borrow a nice padded saddle cover (in case you’re like me and have a butt that is firmly opposed to a hard seat).

Then class started, and away we rode! Our instructor, Aina Williams, was a total top-notch rock star! From what I understand, Flywheel expects EVERY instructor to deliver the same type of performance. After introducing herself, she explained that during the ride, she would recommend a number for torq and a number for power output; the torq number was optional, but the power output number was non-negotiable. A Flywheel instructor is part DJ (music literally drives the class), part cheerleader (let’s face it, this is NOT a class for sissies), and part happy drill instructor. Aina is also in incredible shape.

We started with a warm-up that had me dripping on the floor, and then progressed to a ride with hills, sprint intervals, and a HUGE amount of energy. I dripped all over everything despite making frequent use of my towel. Since I’d driven all the way to Sunnyvale for class (and note to self: check the 49ers schedule before choosing a class) I did my very best NOT to wimp out. I couldn’t keep up 100%.  The hardest part for me was breathing; I literally ran out of breath and had to spend a lot of time focusing on breathing properly (inhale, belly poof out; exhale, belly suck in), which is more challenging than I expected it to be due to being in a cycling position, half bent at the waist. My diaphragm hurt the next day. (Also the day after.) Still, I had the feeling we were all “in it together” and I took little breaks but kept on pedaling.

After the hard-core part of the ride we continued to pedal with a lower resistance while using the mini Body Bars for upper body work. I picked up the four pound bar and tried to do the whole workout with that, expecting it to be kind of a cake walk compared to the ride itself, but ended up doing about 2/3 of it. This surprised me, because I hadn’t worked out my upper body that day and I don’t believe I’m that much of a wimp. (Maybe every bit of energy had leaked out of my body through my legs?) Meanwhile the guy next to me was doing the workout with BOTH of the Body Bars. He definitely deserved the post-ride high-fives more than I did!

Class ended with a surprisingly decent off-the-bike stretch. Admittedly I am a bit of a snob when it comes to the post-class stretch (I blame it on my yoga teacher training, which also has me try very hard not to be a judgmental-rhymes-with-witch during that part of class). It felt SO SO good. After the stretch I slowly hobbled out of class, put my shoes in the already waiting shoe bin, and refilled my water bottle from the designated taps (filtered water in cold or room temp). Then I asked Aina to indulge in a post-ride selfie.  She’s so nice, she said yes. Even though I was a hot sweaty mess, and had a hard time getting my phone to put both of us in the frame. 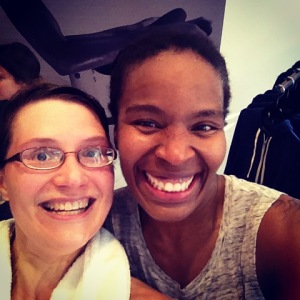 Then it was off to a well-deserved shower. I earned it. Flywheel Sunnyvale has four showers, separate from the bathrooms. Since many of the riders left without a shower (I assume most live much closer than I do), that was plenty. Each is a self-contained and locking unit, complete with fluffy towels and fully stocked with Bliss spa body care. So really all I need to take to future rides is a shower scrubby poof.

In addition to the shower products, the showers also have Bliss body butter, spray-on deodorant, cotton swabs, and a laundry hamper. Other than the moment where I forgot there was a bench in the shower and kicked it (hard) with my left big toe, I think that was the best shower I’ve had in my life. 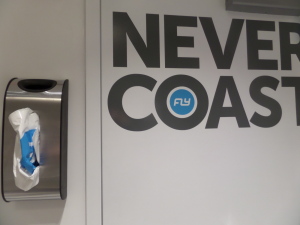 See that thing on the left? That’s a plastic bag dispenser. (I told you, they didn’t miss a trick.) Good thing too, as my workouts clothes were thoroughly drenched, so much so that I could wring sweat out of them.  Icky.  Anyway, on to more pleasant things…outside the shower area is a vanity with hairdryers, hair spray, and other stuff for those more stylish than me.

To celebrate the grand opening the studio had some nice swag giveaways for all class attendees. I scored a tote bag and a ball cap (handy for covering up my mop of wet hair). Then I grabbed a quick snack and finished coming back to reality.

Again, I’m NOT a cyclist and this is pretty far out of my comfort zone.  BUT…I had a great time. Even feeling awkward, wimpy, uncoordinated, and sweaty. Flywheel comes with a great post-workout euphoria, and I plan to go back again. It doesn’t hurt that the parts of me that were sore (other than my diaphragm) are the parts I know I most need to work: glutes, hamstrings, and that elusive glute-hammie tie-in.

Have you tried Flywheel?

If you are in the Sunnyvale area, or northern California in general, give it a try. Click here to create an account and sign up for your first ride: http://flywhl.me/cfm- (Note: this is an affiliate referral link. You’ll get the same or better deals you’d get from going through Google, and have the satisfaction of supporting your friendly neighborhood blogger.)