If you’re a Disney runner, you want to be “Perfect.” If you’re a Nike runner, you want to be a “Legacy.” Many races have some version of this title, where a runner has run the race every year since its inception. First, it’s pretty cool to be able to say you have been there for every race. More important, races tend to provide special swag for these runners—sashes, special bibs, distinctive ribbons on the medals, gifts—as well as recognition in the program or on a banner. So running an inaugural race has its potential drawbacks, but also the potential for great reward. (True confession: I was thrilled to get an email from the Berkeley Half Marathon offering the Legacy runners an early registration opportunity!) 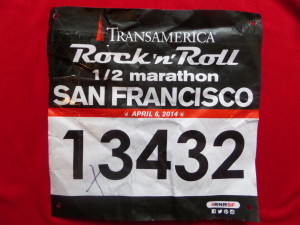 Last year I ran the Inaugural Rock n Roll San Francisco half marathon. While I had my complaints about both the race (a hill right before the finish line and seriously could it have been any colder?) and the series (discontinuation of the elite athlete program and additional fees for Tour Pass holders—both reversed after enormous public outcry), I couldn’t pass up the chance to eventually become a Perfect-Legacy-Whatever of the rock n roll world. (Okay, full disclosure: because the race sold out last year, I signed up to run 2014 at the 2013 expo—before the race.)

The 2014 publicity announced all sorts of changes. The biggest deal was the course change from a loop to a point-to-point. I’d expected a course change, since I heard Rock n Roll series was “stuck” with the 2013 course after purchasing the date and permits from another race organization. The new starting line was out by the beach, a public transportation dead zone (not that there is public transit that early in the morning anyway), and both the parking situation and the need to ride a shuttle to the start made me a little queasy due to less than ideal past experiences with both at other races. Fortunately the pre-paid parking I purchased at the Expo worked exactly as it should—I show up, there is a place for me to park—and the shuttle worked rather well. (My only shuttle complaint is that I didn’t ask for the number of the cute guy who sat down next to me.) As I got off the bus, I was MUCH less worried about the race. Grade: A. 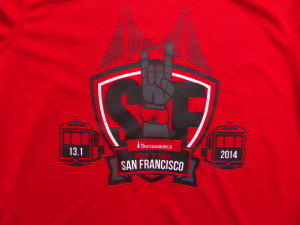 The starting line was a madhouse like any large race, but with plenty of porta-potties. (This is a factor NOT to be underestimated!) The race directors decided to allow the last corral to start first, giving them some lead time before the elite runners and the rest of the pack and to prevent them from getting swept on the Golden Gate Bridge, which had a hard re-open time (and at least a chance of hitting the finish line before the chocolate milk ran out). This seemed like a good idea to me, since the Rock n Roll races usually put about five minutes between corrals in order to keep the runners somewhat spaced out along the course. Sadly, it was the organizing team that spaced out, and not only did the last corral not leave early, it left after the published start time for the race. This was a critical error, but making it worse was the decision to not leave as much time as usual between the corrals. As a result, the last corral (which started first) was still thick and clumped together as the elite runners came speeding through, dodging and weaving to avoid taking out the slower runners. As a result, the first few miles were a big, hot mess. Grade: A for effort, D for results.

I wasn’t feeling particularly speedy and found myself trudging up San Francisco’s famous hills. Fortunately I plodded forward far enough to find my friend Lillie Goker. Lillie is one of the people I added to my personal circle of athlete-ninjas last year during my race to Earth in the Half Fanatics club. She noticed that we were both part of typically non-overlapping Facebook groups, and last year at the Rock n Roll Portland half marathon she introduced herself (“Bain? Hi, I’m Lillie!”) as she ran past. (On each of our best days, Lillie is much faster than I am.) We ran into each other at multiple races, from the Rock n Roll races in Seattle and Vegas to Disney World where we ran part of the Dopey Challenge races together. Since I went to many races only knowing 1 or 2 people from my immediate running group, it was great to get to know Lillie as we criss-crossed the country (simultaneously, but independently) and shared runs, usually bumping into each other randomly somewhere along the way.

To the average person, Lillie does not look like an experienced runner (marathoner!). Right now she doesn’t have a body like the Karas or Laurens of the world. During some races she takes extended walking breaks or does not run at all. What the average person can’t tell from looking at Lillie is that even though she’s still in her 30s, she has Supraventricular Tachycardia (SVT) and Atrial Fibrilation (AFib)—two potentially life-threatening heart conditions that she must vigilantly self-monitor—and the meds that help keep her safe aren’t exactly figure-friendly.

As it turned out, Lillie was not having a great race either. The San Francisco weather was cooperatively not freezing, and the skies were clear enough to reveal gorgeous views from the Golden Gate Bridge, but Lillie’s heart was acting like a feisty two-year-old complete with choruses of “I DON’T WANNA!” Since I pretty much only see Lillie at races, and I know it sucks to be all by yourself and having a hard race (been there, got the tech shirt) it was a total no-brainer to me: forget running hard, and enjoy the morning with Lillie (who reminded me multiple times that really, she’d be fine without me…it took me a few to determine she was concerned she was “ruining” my race, and not annoyed by my yapping!).

It would be exaggerating to say that EVERY other runner passed us, because we did not DLF (dead last finish); but when we reached the finish line, the chocolate milk was gone and the beer tent was populated by fewer than a dozen other runners (who had not, fortunately, consumed all the beer). That said, we both had as much fun as one can have at a race. We waved at Dr. Dribble as he ran by with his basketballs, I introduced her to my “Got The Runs?” crew as they came through, and I had a brief conversation with Pavement Runner (another athlete-ninja, but a fast one!). Lillie actively managed her heart condition and we enjoyed the day.

A good race for me is one where I enjoy myself and get to spend some time with friends. I can run faster on any day I want, but I can’t always see Lillie. Besides, I was having a pretty crappy race until I ran into her. Misery loves company? Maybe, but I’d say misery vanishes in the San Francisco sunlight in the company of friends. I’d say it was Perfect. 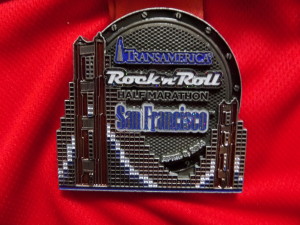 Did you run the Transamerica Rock n Roll San Francisco half marathon?