Greetings from The Palace!

Home » The Blog » Life Updates » Greetings from The Palace!

The cardboard palace, that is. I just moved from Alameda, California back to Portland, Oregon. While it is absolutely glorious to be back in Portland in the summer, can I take just a moment to whine? Moving sucks. My advice? Don't ever move. (Seriously. The next time I move, it better be because I just bought the house I plan to die in.) All of the best moving advice on the internet talks about moving like you have several months to plan–I'm not sure who this applies to, exactly. When you move in a hurry (especially after living in the same place for more than five years), nothing is organized. I mean, the first few boxes are carefully packed and labeled, and the label matches the contents. Towards the end, you have a crapload of boxes marked “miscellaneous.” What's  inside? It's a mystery! At times I feel like I'm shopping in my own boxes…

One of just three broken things (all of which I packed). Two broke because I mistook one box for another and dropped it.

Speaking of which, opening the boxes leads to even more “fun” surprises. This includes the “treasures” (Advil that expired in 2013, expired coupons for San Francisco eateries) and the “interesting facts” (like how my silverware holder thing is about 1/16″ wider than my kitchen drawers, and how the bra I bought a few months ago but hadn't worn yet has a dud strap that needs repaired). 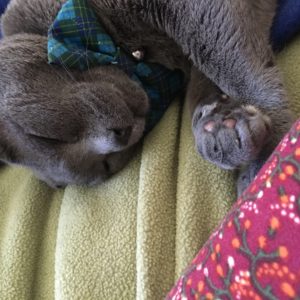 The Professor, keeping a paw on me so I don't wander away unattended.

My life is still mostly in boxes, save for me, Professor Nick Sterling, the cat accompaniments (water fountain, litter box, food dishes, cat treats…), and the laundry (from which I am currently dressing myself). It turns out that unboxing in an apartment is a cascading process. So, for example, I can't unbox the books until I unfold and stack the bookcases; that requires both finding the hardware to stack the bookcases and moving the boxes out of the way, and placing the China cabinet…which can't move until I clear a path, which requires moving the sofa and dining table, which requires moving some boxes out of the way… When I packed for Rock ‘n' Roll Seattle, I literally could not find my half marathon running shoes and just bought a new pair at the expo. (Brooks Glycerin, size 11. Pulls no punches, fits well, #runhappy.) It's a little insane. The high point, to date, has been finding the box that had the bed sheets and pillows in it, since nothing beats sleeping in my own bed.

In case you missed it, I moved back to Portland for a shiny, new, full-time day-job.  So far, I'm loving it, and thrilled that I made the move. It's fairly scary to leap into a new job, especially if you've been at the same employment for years, but I'm confident I will continue to love my “new” life. Work has had me very busy and traveling out of town (I've been on three out-of-town trips requiring airplanes, and that doesn't count visiting relatives in San Diego), as I wasn't in a situation where I could afford to take an extended vacation and my new employer would have loved it if I could have started the day after I accepted the offer. (Which I could not have done, move aside, as I feel it is important to live up to your own integrity when making choices. I wanted to leave my former employer in a good position, all my files/work in order, upcoming events covered, etc. No need to burn bridges or be a jerk–I was there for years, like the people, and do wish the firm well.)

My computer, while found, is lifelessly awaiting the day I open the box containing the power cords. (Meanwhile my computer at work won't support a browser I can use with Co-Schedule. Not that I'm supposed to be using my work resources to blog, but…) I have partially drafted posts on Hawaii, Rock ‘n' Roll San Francisco, The Blue Ridge Marathon (my BEST, ever, DNF)…and I probably should have written about Rock ‘n' Roll Seattle by this point. While I have connect the iPad to the internet, a certain pushy kitty-cat has been making it very difficult to type on the Bluetooth keyboard. (Someone needs to invent a cat snuggle pouch with a built-in petting device for the cat that also serves as a “laptop” desk. Seriously.) 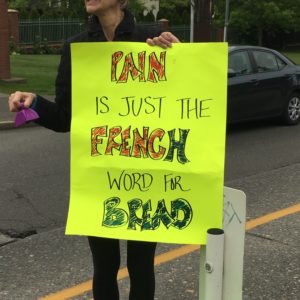 Favorite sign from the 2017 Rock ‘n' Roll Seattle Half Marathon

While I feel like I should  be blogging and tweeting and instagramming All Things Healthy Lifestyle, in reality my kitchen is covered in partially unpacked kitchen goods and forwarded mail, any my healthiest meals have been Click for breakfast (and oh yeah, I totally have a post to write about that…and a super overdue book review that I would write now but I'm still trying to figure out which  box it is in, and this great paleo-vegan protein powder). I took a Pure Barre class, but that doesn't quite balance out the amount of pizza I've eaten since moving. If life is an 80-20 proposition, I've been eating and living in that 20…and the 80 is asking for payback!

Just to make matters more chaotic, I'm largely working out of Seattle for the next two months or so. This means unpacking happens on the two days I am home, in between loads of laundry and spoiling the cat. 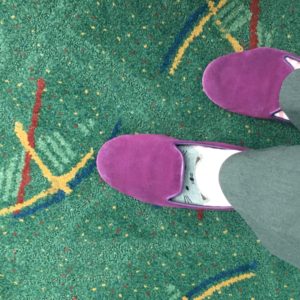 If you're in Seattle, share your best tips on where to eat healthy vegetarian and where to work out?

If you're not in Seattle, got healthy living tips for the road warrior?